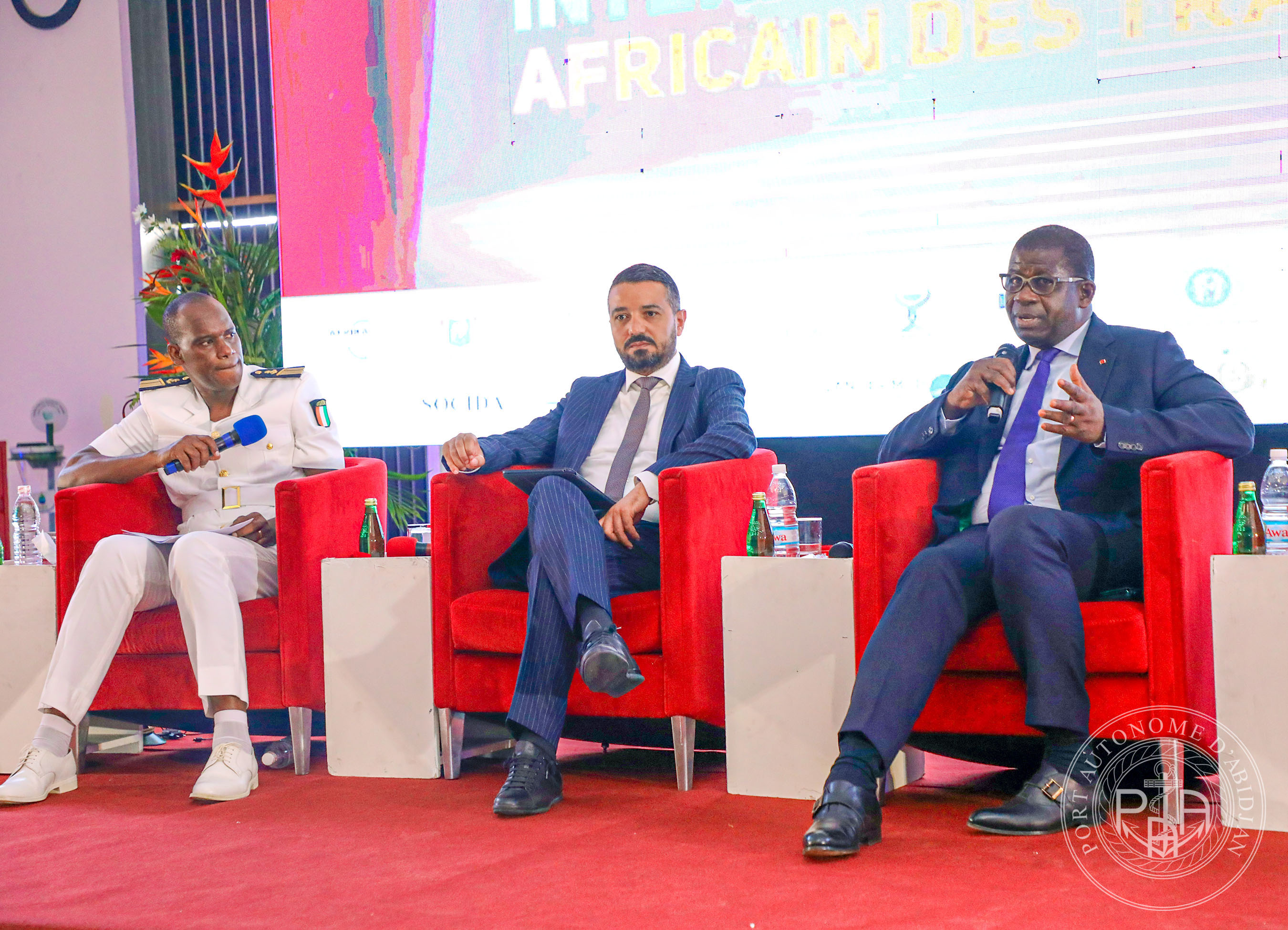 The Abidjan Port Authority (PAA) is a partner of the 6th edition of the International Forum and African Transport Exhibition (FISAT) which opened its doors on Monday 4 July 2022, at the Sofitel Hôtel Ivoire in Abidjan, under the theme, "Transport and infrastructure, Factors of Economic Development and Sub-regional Integration."

Placed under the High Patronage of HEM. Patrick ACHI, Prime Minister, represented by the Minister of Transport, Mr. Amadou KONE, this international forum intends to demonstrate the important role that transport infrastructure must play in the development of African countries. It also aims to propose ways to improve the development of transport systems on the continent.

It is in this perspective that the panel around the theme, "Connectivity of African Ports: Issues, Challenges and Prospects", that Mr. Hien Yacouba SIÉ, Managing Director of the PAA, co-hosted with Mr. Ahmed BENNIS, Development Director of the Tanger Med Group.

In his speech, the Managing Director of the PAA stressed that connectivity is a country index. It depends on various factors such as geographical location (ports located on major world shipping lines are the most advantageous), the availability of freight in sufficient volumes, the performance of transport infrastructure, etc.

Speaking specifically about the Abidjan Port, he said that if the factor of geographical position is less advantageous, it has nevertheless the benefit of the dynamism of the Ivorian economy on the one hand and a positioning on large markets with high consumption that are ECOWAS and WAEMU.

In addition, Abidjan is an efficient and dynamic port platform in full development through the implementation of structuring projects. Other related infrastructures such as the important road and rail network, as well as the dry port of Ferkessédougou (north of the country) also boost the connectivity of this port.

At the regional level, to ensure the connectivity of African ports, Mr. Hien SIÉ called for the acceleration of the implementation of instruments for a true economic integration. He insisted on the development of transport infrastructure, particularly roads and railroads. For him, this is an essential condition to make African ports more competitive. He also stressed the need for the countries of the sub-region to trade more among themselves.

Speaking on the issue of transshipment, the Top Manager of the PAA said that the capture of this traffic very competitive and dependent on the strategies of ship-owners, requires infrastructure reception of a certain level. For a long time, the Abidjan Port has been disadvantaged for its shallow draught (11.5m) and has been working for the last ten years to upgrade its facilities. To this end, the Vridi canal has been widened and deepened to accommodate the largest container ships that ply the African coast. In addition, with the forthcoming commissioning (November 2022) of the second container terminal (TC2), ships with a draught of 16 m, carrying 12,000 containers, can be accommodated there.

Finally, on the issue of digitization, the Managing Director said that it is necessary to federate all the applications used by the various actors of the port platforms into a single ecosystem. It can significantly improve the quality of port operations and services, particularly the management of logistics spaces, the fluidity of port areas and the performance of handling operations.

In this regard, he welcomed the creation by the Ivorian Government, of the Single Window of Foreign Trade (GUCE) which expands the scope of stakeholders and monitoring procedures by the various stakeholders.

However, he concluded, any digitization project must be preceded by the key factors of success, which are the improvement of the performance of the port tool, the related infrastructures, and the effective involvement of all the stakeholders of the platform.

During the debate, Mr. Hien SIÉ stressed that the Covid-19 crisis was not so disastrous for the Abidjan Port which, after a slight drop of 1.5% in 2020, was able to bounce back to achieve a record traffic of 30 million tons in 2021, i.e. a growth of 12% driven by the vitality of the national economy which represents 80% of this traffic.

Other panels are planned during the forum with themes of interest, among others:

The FISAT is organized by the Afrika Transtour company. This 6th edition, which will end on 6 July 2022, is dedicated to the late Prime Minister Amadou GON COULIBALY, for his action in favour of the development of the transport sector in Côte d'Ivoire.

The event was attended by several countries including Morocco, France, Burkina Faso, Niger, Gambia, Chad and Guinea Bissau, a special guest, represented by its Minister of Transport.